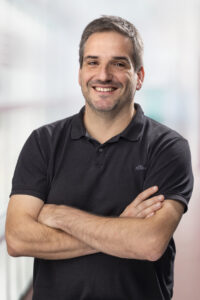 Thomas studied biology at the Universities of Göttingen (Germany) and Manchester (UK). He did his doctoral thesis in the group of Michael Udvardi at the Max-Planck-Institute of Molecular Plant Physiology in Golm (Germany) from 2001-2005 before he obtained a postdoctoral Marie-Curie Fellowship of the European Union to conduct a two-years project (2006-2007) at the Laboratoire des Interactions Plantes Micro-organismes (LIPM), INRA-CNRS in Toulouse (France) in the lab of Pascal Gamas and Andreas Niebel. In 2008, he moved as a junior group leader to the University of Munich (LMU) into the department of Martin Parniske. After being awarded an Emmy-Noether Fellowship of the German Research Foundation (DFG) in October 2009, he started his independent lab in the same place. Thomas then followed the appointments as a professor at the LMU in 2015 and moved in October 2016 to the University of Freiburg where he currently holds the chair in Cell Biology.