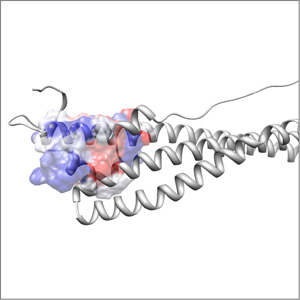 The principle of Intrinsic Disorder (ID)

“Intrinsically disordered regions (IDR) are flexible and extended protein segments that have no ordered secondary structure under physiological conditions. Structural pre-requisites as the basis for ID have been described. These regions exhibit large net charges at neutral pH as a consequence of harbouring many non-interacting charged groups and few hydrophobic residues. Additionally, their sequences are enriched in disorder-promoting residues (D, K, R, S, Q, P and E) and devoid of order-promoting residues (W, Y, F, I, V, L and T). These features concomitantly result in low compactness and globularity but high flexibility of the respective region. Proteins harbouring long stretches of intrinsic disorder are frequently involved in essential processes such as transcriptional and translational activation, chromatin remodelling and signal transduction.
A key feature of signal transduction is the low affinity/high specificity kinase-substrate interaction, where both partners can dissociate rapidly and efficiently. Hypothetically, such combination could be achieved in a coupled binding and folding mechanism consisting of disorder-to-order transitions. In these transitions, the originally disordered region is locked in the binding conformation instead of exploring different conformations free in solution. This results in a reduction of entropy in the free energy of binding, which translates into a weaker binding (low affinity) compared to interactions that involve already ordered proteins with equivalent exposed surface areas. The specificity is determined by the extension and complementarity of the interaction surface area, which in the case of intrinsically disordered regions, is large even when the interaction domains themselves may be small.”
(modified from Marín and Ott (2012); Frontiers in Plant Science, 3:86)

The N-terminal region of most remorin proteins is almost entirely intrinsically disordered. As a consequence these regions host the majority of phosphorylation sites within the protein. We assume that diversity in remorin function is significantly determined by this structure. As an example: While the N-terminal IDR is essential for oligomerization of the group 1 remorin AtREM1.3 (Marín et al., 2012) it may be dispensable for in case of the symbiotic remorin SYMREM1 (Tóth and Stratil et al., 2012). We hypothesize that these regions are regulatory elements within the proteins that regulate protein-protein interactions by disorder-to-order transition.

Publications from our lab on this topic: